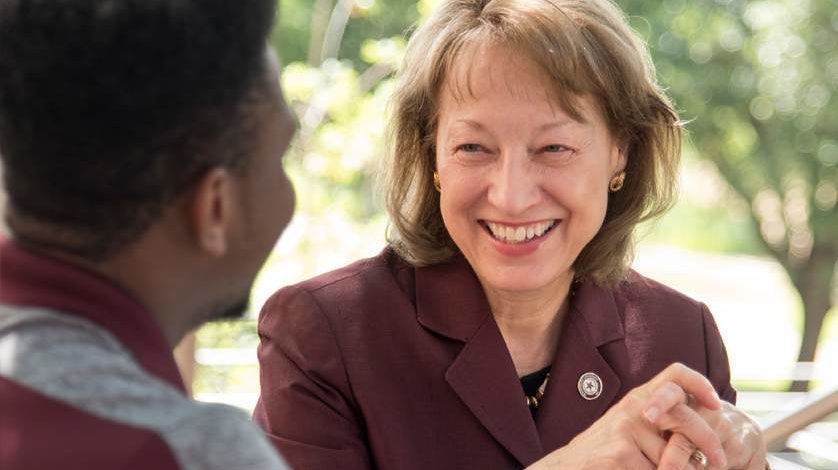 Dr. Denise TrauthAfter 20 years leading Texas State University, the first woman in the role retires this year with parting words on the importance of inclusion in higher education, now more than ever.

“I am very proud of our student body in many ways,” says Dr. Denise Trauth, president of Texas State. “It is a larger student body than when I began at the university, and it is a more diverse student body than when I began. I am proud that the demographics of our students at Texas State more closely match the demographics of Texas than any other of the public universities in the state. We have worked hard to serve the whole state, and I feel like we’re doing that.”

Growing up as one of seven daughters in Ohio, Trauth learned the value of education early on from her parents. They encouraged each of their daughters to see education as a way forward to more opportunities. That message stuck with Trauth in her career. And it is a message that she believes is especially critical for younger generations today to hear.

“Part of American culture now is a narrative that says college isn’t important,” says Trauth. “But if you look at what higher education does for people, it doesn’t just prepare them to go out into the world of work. It does that, and it does that very well. But we also know that people who go to college have better health outcomes, they vote more, they are more civically engaged. College is not just about bettering your income but about developing you as a whole person.”

Trauth’s journey in higher education speaks to that growth. She earned a bachelor’s degree in English at the College of Mount St. Joseph, a master’s in journalism at The Ohio State University, and a doctorate in mass communications at The University of Iowa. From 1977 to 1993, Trauth served as an assistant professor, then professor, at Bowling Green State University. There, she chaired a department and became associate dean of the graduate college.

But becoming president of a university, let alone for a 20-year tenure, was not on her radar.

Around 1993, Trauth accepted a job at the University of North Carolina at Charlotte (UNC Charlotte) as dean of the graduate school and associate vice chancellor for graduate programs.

“It just felt like a fit,” she says of the UNC Charlotte deanship. “Well, three and a half years into the job, our provost took a presidency post at another university, and the chancellor at UNC Charlotte called me to ask me to be the interim provost. Now, I can honestly say provost was a job I never, ever wanted. I thought the dean of the graduate school was a much better job. But when the chancellor asks you to be the interim provost, it’s not really a question. So, I took it.”

In 1997, Trauth took on the mantle as UNC Charlotte did a national search for a permanent provost. Meanwhile, she worked closely with then-chancellor Dr. James Woodward, learning about the challenging task of leading a university “from the inside-out.”

“Jim was so generous, sharing with me not just what he did but why he did it,” said Trauth of her days at UNC Charlotte. “As a faculty member and even as a dean, you look at the provost or chancellor, and you know what they do on one level, but not on another level.”

Woodward spotted Trauth’s talents and appointed her as UNC Charlotte’s permanent provost as well as vice chancellor for academic affairs. She led the campus through two rounds of strategic planning, administering more than 80% of the university’s budget. And, to her surprise, Trauth discovered that a presidency may be the right next step for her.

“I realized that I did want to be president, that it was a good fit with my talents, skills, and frankly the kinds of things that I like to do,” says Trauth. “But there wasn’t one moment when I knew that I wanted to be president. It was a very gradual process over a few years. And so, after five years, I became a president.”

Back in 2002, Trauth took the helm of Texas State after the Board of Regents voted unanimously to appoint her to the presidency. A search committee of faculty, staff, students, alumni, and community members had worked over six months to find an ideal candidate across the country. Trauth emerged as a clear choice.

“When you get outside of all the data points around enrollment and degree programs, it just comes down to her great judgment as a leader for the university and her ability to bring everyone together to gain consensus around what needed to be done — then following through on getting it done,” says Dr. Gene Bourgeois, Texas State’s provost and vice president for academic affairs.

Bourgeois noted that the U.S. Education Department had designated Texas State a Hispanic Serving Institution (HSI), which meant that at least 25% of undergraduate full-time equivalent students identified as Hispanic.

“That one, probably for her and all our stakeholders, was very personal,” says Bourgeois. “When she arrived at Texas State, she engaged in good strategic planning within her first few years to make that happen. She borrowed this phrase that she read once: ‘deliberately diverse.’ And she used it to get buy-in from people for Texas State to become ‘deliberately diverse,’ particularly given the state’s demographics. Her call to action really helped drive the university’s status.”

During Trauth’s tenure, Texas State increased external funding for research and bolstered philanthropic donations to the university. Its Football Bowl Subdivision moved up to Division I in the National Collegiate Athletic Association (NCAA). And the university was reclassified as an “R2: Doctoral University” in the Carnegie Classification system due to the institution’s heightened research activity. It became a Texas Emerging Research University.

“That was a major milestone because it recognized that Texas State had started offering a critical mass of Ph.D. programs and awarding more Ph.D.s,” says Bourgeois, noting Texas State added 80 academic programs under Trauth. “That was a big one for me.”

“She was so on board with DEIA initiatives that I can honestly say that she never said no to an idea,” says Silva. “She instead would say, ‘tell me what your proposal is and how we’re going to do this.’ In the last few years that we worked together, we were able to do so much in such a short period of time that it is inspiring.”

Silva points to one such DEIA initiative called the Bobcat J.E.D.I. Program, which is a diversity certification program for Texas State faculty and staff. Trauth’s backing was also integral in creating the Texas State Monarch Center for Immigrant Students that supports DACA and undocumented students, notes Silva.

Trauth’s successor is Dr. Kelly Damphousse, who served as president of Arkansas State University. She offered advice to Damphouse and any president starting out in their positions.

“What you have to do at the beginning is know your core values with the great hope that you wouldn’t have taken the position if your values didn’t align with it,” says Trauth. “There has to be an intentionality in lifting up those core values, making sure that they are at the center of your presidency. And those values won’t be that different for a man or woman. Integrity, honesty, inclusion. Those are the things any president would want at the center of their tenure.”

The Texas State Alumni Association recently awarded Trauth the 2021 Outstanding Leadership Award in recognition of her service to the university. In her retirement, Trauth said that she plans to spend more time with her family. She is married to Dr. John Huffman, professor emeritus at Bowling Green State University and UNC Charlotte. The couple have two daughters, four grandchildren, and four great-grandchildren.

Amid mounting affordability and access concerns in higher education, Trauth remains firm in her belief that college is transformational — and higher education leaders must do all they can to bring students across that degree finish line regardless of circumstances.

“I think the challenges and the opportunities are the same —and that is making sure that higher education is available to all Americans,” she says. “It is so very, very important that — as a country, as a state, and as a university — we continue to bring in young people, with backgrounds and from families, who wouldn’t have been predicted to go to a university. We must continue to bring them into higher education every single year.”