Earlier this week, Cynthia Liu, a senior at the University of Wisconsin-Madison, was picking up her groceries at a supermarket near campus after class when another shopper asked her if she was from China.

When she told him she “no”, but that her family was, he said, “‘Good, because if you are, I’m getting the f*** away from you.’” With a glance at her and another Asian student standing nearby, he ran off.

“We just stared at each other like, ‘What the heck just happened?’” Liu said. “We were just going about our day.” 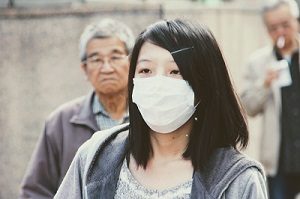 Since a case of the coronavirus was confirmed at the University of Wisconsin-Madison last week, Liu said she’s seeing an increase in discrimination against Asian students on campus as well. Her classmates are avoiding Asian restaurants and steering clear of Asian students who wear masks, a “cultural thing” that began long before the coronavirus spread. Someone in the library made a disparaging remark about Chinese people to her friend from the Wuhan area, where the disease is centered, while she was talking to friends about her worries regarding her grandmother’s health.

This isn’t just a University of Wisconsin problem.

As the coronavirus spreads, with a majority of the over 40,000 cases in China, Asian international students and Asian American students are facing overt and covert discrimination on U.S. college campuses as their peers panic.

According to Dr. Russell Jeung, chair of the Asian American Studies department at San Francisco State University, the coronavirus isn’t the first time Asians have been the victims of health-related discrimination in the U.S. There are records – from the late 19th century and the early 20th century – of Chinese people deported for having smallpox and quarantined in San Francisco’s Chinatown during the spread of the Bubonic plague, he said. Chinese immigrants were also historically turned away from the U.S. because of supposed health concerns.

“Asian bodies have always been racialized to be seen as dangerous and threatening and disease-ridden,” he said.

So far, there have been at least 15 cases of the coronavirus in the U.S., including a number on co